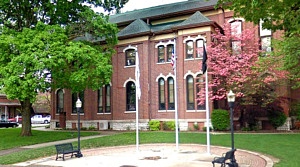 This Courthouse is Bond County’s fourth, all of which were located within the present Greenville Square area. The first courthouse was built in 1823 and the second one 1833. We began using the third courthouse in 1854 after the second one became too small for the County’s needs and had fallen in a state of disrepair. The price of the third courthouse was up to $12,000 from the $2,135 bid price for building the first one. The current Bond County Courthouse was built following a fire which destroyed the already too small courthouse on March 24, 1883. In January, 1884 the county commissioners accepted plans for the present courthouse and awarded a $20,000 contract for its construction.